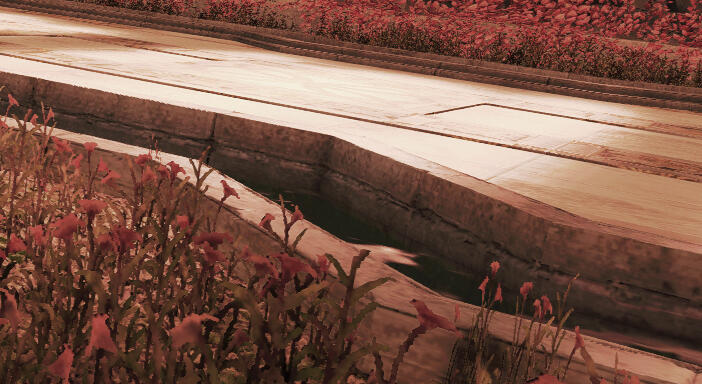 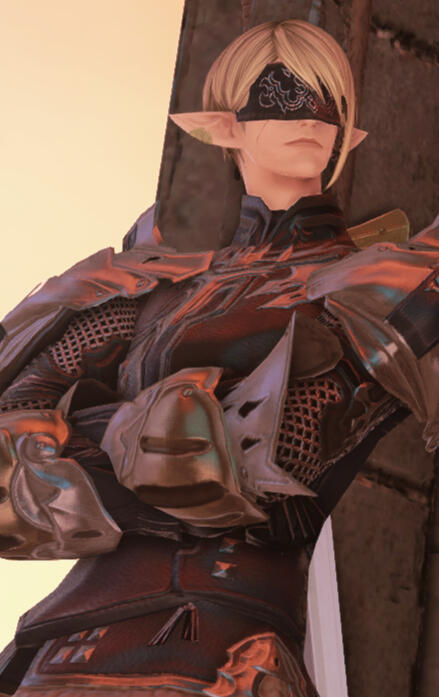 austerlain has feathered blond hair, long and pointed ears, pale skin and green eyes with deep dark circles. he's remarkably short for an elezen, with a rather slender build for his choice in arms. the elezen speaks with a polite, distinctly ishgardian tone. there's a scar up the right side of his face, pupils curiously slit should you catch him agitated and unmasked, and underneath his layers, a smattering of what seems like blue-white scales on his back...

as an individual, austerlain is honorable, fair and levelheaded, albeit cautious and hardworking to a fault. though somewhat awkward in personal settings, he thrives in professional ones, preferring the calculated nature of negotiations to jovial ballroom chit-chat.

favors diplomacy to violence, quick-witted and cautious. in possession of a sharp tongue, should the situation call for it. 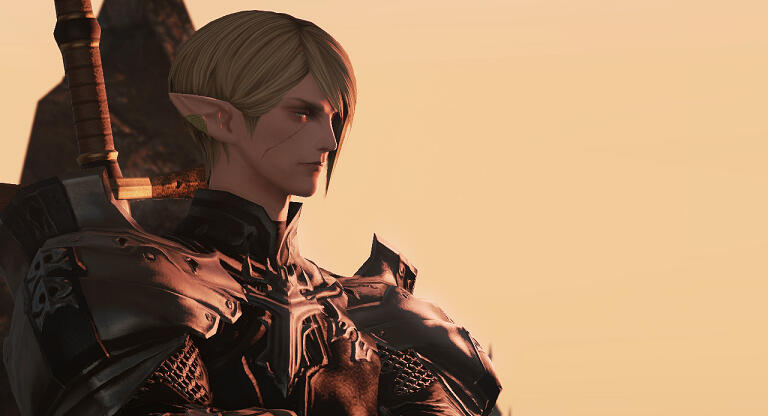 Ishgard is steeped in faith, Her people cowering in fear and raising their hands and voices in praise, bowing in prayer. Ever hoping for entrance into Her halls and fearing Her wrath, for their deity is the Fury, violent and loving in one shining arc of her spear, nurturing and ruthless in one and the same breath.

He oft wonders what She would think, seeing him as he is now. While he is Austerlain, his true name is Zephirin de Valhourdin. Even away from the cold stone and steel, Zephirin is still a pious man, despite all that has transpired— But not a sinless one, and he knows this. Since the events of the Singularity Reactor, there is precious little room in his heart for notions such as knighthood anymore, with how terribly the thought has been corrupted by his own hands.

Perhaps he believes himself outside of her grace, perhaps he thinks himself too far gone to be offered salvation. He does not have it in himself to personally seek out his judgement, only engaging in paltry attempts to help fellow spoken. He is— A coward. One who cannot even bear to go back to the city he calls home, giving it and its inhabitants a wide berth.

But should judgement come to him, who would he be to refuse it?

Born to a minor noble house with little of note besides his father’s grand exploits as a knight of Ishgard, Zephirin had a remarkably unremarkable childhood, marked mostly by the general absence and later untimely passing of Lord Valhourdin. Nevertheless, Zephirin looked up to him and walked in his footsteps from a young age, urged on by his mother regaling him with tales of valor and justice— Handling practice swords far too large for himself in play, and later, lessons. Even as a prodigious squire, he found himself grasping for two-handed blades, continued using a custom-made claymore even as he became a Temple Knight after winning the Grand tourney at the age of 15 summers. It wasn’t what he imagined it to be from all the stories and glamour about it, but he vowed to himself he’d become someone great not for his strength or wit alone, but for his fairness, and change the meanings of knighthood from the ground up. His ambitions for the Seat of Lord Commander budded, then bloomed.

Mentors and peers spoke to him in hushed tones about those who commonly bear blades such as his, the heretics who hunt down men instead of dragons, the dark knights that lurk in the blackest of nights. They warned of a turncoat with the same arm, a faithful commander who suddenly absconded to the shadows. Their criticisms fell on deaf ears, but the young knight found himself intrigued. He’d never received formal training suited to his unorthodox choice in arms, but dismissed the train of thought before it could go any further-

Until his ailing mother passed when he was 19, and some fetter within him loosened in his grief. Zephirin sought out Ompagne, and, at least for some time, became one of his pupils. While he never fully embraced the abyss, he held no contempt for it and became a dark knight in his own right. He became a commander of the Temple Knights at 24, lost the title of Lord Commander to de Borel at 28, roiled in jealousy and venomous pride. His goals warped, his status as a prodigy thrown truly off-balance for the first time in his life, losing something he thought was most certainly his.

Drowning in such a shade of green, Zephirin joined the Heaven’s Ward, after which he cut ties to Ompagne and all associated with him. He was promoted to First Seat at under circumstances he dared not question, led, served, convincing himself that being a guiding presence at the Archbishop’s right hand would be enough.

Yet he gave himself freely to the Archbishop, mind, soul and freedom all, to be blessed, tempered— Dying for his mistakes at Azys Lla at the age of 29 summers. And then, in a surge of his aether being ripped apart and ground together again, he lived.

Lived, as if the Fury herself thought a clean and simple death was too good for him.

SUPER-POTION
better safe than sorry. bandages and 2-3 flasks at all times.

ANTIDOTE
see above, but just one.

FOOD
two waterskins and a water crystal, along with a bag of tea leaves. food can range between bread, sandwiches, restaurant leftovers, sausage, jerky, trail mix, dried fruits and scavenged miscellany. travelling like this brings back memories— austerlain tends to err near civilisation regardless.

CLOAK
for keeping warm. doubles as a blanket.

BLACK CHOCOBO WHISTLE
for calling upon his chocobo, minerva. she hasn’t answered his summons for some time. he worries for her.

CAMPING SUPPLIES
a tent, a thin bedroll, a pot, cutlery, flint. usually kept in minerva’s saddlebag or a personal pack.

HUNTING KNIVES
his first posessions- barring clothes- after waking up near idyllshire’s gates. simple, but sharp, with handles of smooth wood. one is always strapped to his left thigh. he’s in the habit of carrying knives, particularly when on the field, and feels rather unsafe without them.

COBALT ZWEIHÄNDER
preferred weapon for traveling- comparatively slim and low-profile. more than enough to get the job done.

SHATTERED HEART
the very reverend archimandrite's personal claymore, and a constant reminder of the values he has forsaken to get this far. it takes in ambient aether and possesses enhanced conductivity, facilitating his handling it with physical augmentation and the casting of sacred spells.

where it has ended up, he knows not.

✞ most used to para- and novella-style rp, no need to match reply length if i spit up an entire novel.

✞ if i have my rp tag on, feel free to just walk up! if i don't, /tell me and maybe we can work something out.

✞ GMT+1, if i'm at a big rp event, chances are i am half asleep in my seat. please bear with me for minor typos.

✞ i reserve the right to refuse interactions.

✞ i'm of age but erp is strange territory in catholic elf land. don't expect much.

✞ i'm also trans, so if you use language like f*ta or c*ntboy, get out.

✞ multiship with chemistry. do not force ships on me. my other relationships are not your business.

✞ no godmodding or powerplay in any form.

✞ ic =/= ooc. zephirins terrible life decisions and myriad opinions (and lack of them) are his own.

i picked up this muse fully understanding general fandom sentiment towards him and wont be too upset if someone suddenly decides to clock him in the face. please note that he will likely respond in kind.

✞ should my backstory for him directly conflict with your character’s (fray, sidurgu and ompagne in particular), we can probably work something out- i wont try to force anything.